Do you know what breatharianism is really about?

Some of you will not be ready to read an article such as this, if you feel that way, try putting anything you don’t believe in an imaginary box, just store it away somewhere. In no way do you have to like/believe/relate to what I’m about to say, it’s totally up to you what you are comfortable with.

The topic of this article is breatharianism/pranarianism/living on light – whatever you want to call it.

Update: The next pranic festival will take place in Romania on the 15-17th August 2017, don’t miss this opportunity to meet some of the world’s most extraordinary speakers, book your space here today.

Definition of a breatharian:

A breatharian is someone who lives without consuming any food and/or water. Just to be clear, it is NOT fasting or starving. You do NOT deplete your body of necessary nutrients, you get all that from the universal energy (prana), i.e. everything your body needs in its purest form. Some people get it through light and sun, some just through the air itself. This is not magic and you don’t need special genes to be able to do this, ANYONE is able to teach themselves this.

I’ve made this little diagram to show how I believe (and I’m by far not the only one) humans “evolve” food wise. For the record though, I don’t necessarily think that everyone should or can follow this path, we are all on this earth for a specific reason, and if pranic living is not for you, then that’s great.

I first came across knowledge of this lifestyle through my yoga teacher, she told us Prahlad Jani (“Mataji”) was coming to Marbella and asked my mum and I if we would like to go see him. He is an Indian 81 year old sadhu who has lived without food and water for the last 70 years. He has had a number of studies done on him and spent time under observation in hospitals – doctors say he’s in perfect health. I figured then that he was one of a kind, that there were very few people who could do that in this world and that they must be real masters to reach such levels! Recently I discovered how wrong I was – there are TENS OF THOUSANDS (if not more now) of people all around the world who live this way and it’s spreading fast. People are starting to realise that we dont actually need food if we can get everything we need from the energies that surround us every day…if we know HOW to use it of course.

Warning: please do NOT attempt to just give up food without proper training and guidance, like I said, you need to KNOW how to take in prana in order to survive off it, if you go into this unprepared, you are pretty much starving yourself and can hurt yourself. Just having motivation is great, but its not enough.

The reason why I decided to dedicate a section of my blog to this subject is because I had several personal experiences with pranic living, and I would love to share with you the first time it happened to me. As well at that, I also personally know many people who live partially or entirely on light, so it’s a very normal topic of conversation in my house.

In May 2012, I went to a workshop (I decided to delete who’s workshop this was since it’s not relevant and everyone has different experiences – don’t want people thinking like “oh if I go see this guy, I’ll start living off prana”). The purpose of this workshop was to use sound vibrations to experience forms of ancient Egyptian alchemy and clear out our chakras. It was only weeks later that I read that cleaning your chakras is an important step on the way to becoming breatharian.

I won’t go into the workshop and other changes I experienced through it, but I will tell you about one very very curious effect it had on me the day after – I pretty much went breatharian for a whole week! The guy who led the workshop did say that we will experience “things” for the next 7 days, he even joked and said “try not to quit your job” haha, but I never expected something like this!!

I simply lost my hunger for 7 days!

That morning I had my flight back to London, I wasn’t hungry but I thought I should eat anyway since I’m travelling (I’m sure you’ve all done that!). Airports have this weird effect on me, even if I ate just before getting there, I’ll still eat at the airport. This time I wasn’t hungry at the airport. I wasn’t hungry in the plane. And I wasn’t hungry 6 hours later when I had already landed. My body was “speaking” to me, it was telling me not to eat, and so I listened. I have a very good connection with my Higher Self, so I kept asking it every half an hour if I should eat that apple that was in my bag. Every time the answer was “no”.

I thought ok whatever, I must be too overwhelmed with energy from the workshop. I went to sleep. In the morning, I was still not hungry but more from habit than anything else, I made my morning smoothie. I had a few spoonfuls and I was full, my body just physically didn’t want the food I was giving it. Because I spent the weekend watching Jasmuheen’s videos (highly recommended!), I knew it was possible, so I figured I’ll just go along with it, see what the universe has planned for me. I’m not stupid enough to starve myself, I just figured I would eat when I’m actually hungry. Jasmuheen is one of the world’s most famous breatharians (though she doesn’t call herself that because she drinks water and occasionally has a bite of fruit) and I have been to see her several times after this and even organised several workshops for her in Spain in 2014 and 2015.

Long story short, that whole week I felt (very slight) hunger only twice, first time I ate a couple of tomato slices, the 2nd time I spent almost £10 on raw sushi… and ate just ONE – I fell into the trap of letting my eyes control my stomach.

Thing is, I have VERY clearly realised that our hunger is divided into the need-hunger and the want-hunger. I honestly believe that a lot of today’s health problems will be fixed if only people would eat when they NEED to, not when they want to.

The incredible thing with that week was, I don’t know exactly how it happened, probably a combination of factors but it was like my feelings of want-hunger were totally suppressed. I would walk around smelling yummy food smells and not caring, not even thinking twice about wanting to eat it. I don’t even know how to explain it, it’s like I had lost all interest in food. Even more so incredible….and yes this is a big one….I didn’t want any SUGAR!! I have an incredible sweet-tooth, and the fact that I completely ignored all things sweet for a week was a miracle for me.

How I felt emotionally not eating for a week 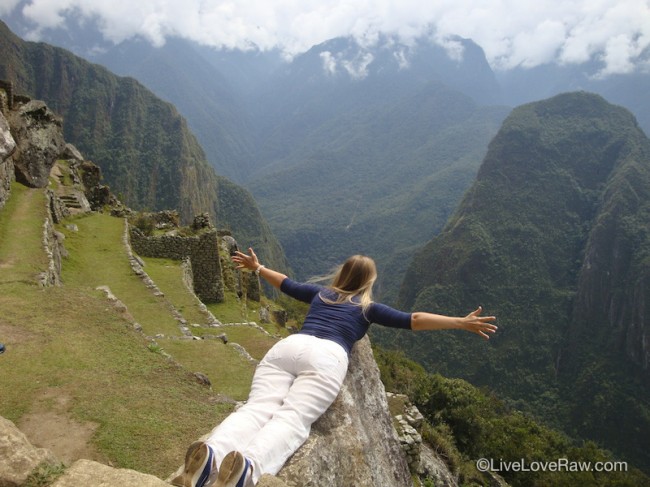 I can’t even tell you how INCREDIBLE that felt. I felt so free, I felt so clean, so happy that I didn’t want to put all that heavy stuff in my body that I didn’t need! At the same time though, I must admit I was a little freaked out, who wouldn’t be? Yesterday I was eating pasta and croissants (rural German villages don’t cater too well for raw vegans..) and the morning after I was breatharian, wouldn’t you be a little nervous?! My mum was an awesome support, she kept telling me that it’s an amazing thing, that I should just go with it.

So for those of you wondering, it’s not something people force on themselves, it’s not a difficult process and it’s actually very enjoyable if you let it naturally come to you. You don’t starve yourself, your hunger just naturally dissolves when you are ready.

On day 6 I really felt the need to clean out everything I had in my gut, I read on a breatharian site that at the beginning stages you should be getting an enema done every day, then less and less until you’re totally clean, so I thought maybe I need to be doing the same.

I hope I never forget the feeling of having NO food in my body, it was so awesome! I felt so light, so clean, so alive and healthy! The detox sucked (mood wise) for the first few days, but it was so worth it!

During that week, as usual, I meditated every day so I took in vital life energy needed to sustain me. This is by far the most important thing to do because if you are not taking in prana, then your body will eventually go into starvation mode.

Why did I start eating again?

So how did it all end? Well it didn’t, it just paused, I got a little taster that life on energy IS possible, and that that is what I should be aiming for in life. Just like with everything else, the universe gives you a taster of some “magic” and then takes it away and says “now you know it’s real, so go work for it!” haha 🙂 I definitely will!

But if you’re really curious why I started eating again, I had a solo to sing at a charity concert, and I got a little nervous and…yes I forcefully ate to stop stressing. How sad, right? Our habits really do make us weak…

Update: since that week, a lot of things have changed for me, and I actually experienced living on prana several times after that, the longest period being just over a month. I never forced it or asked for it, one day you just wake up and feel that you’re not hungry and so I listen to my body. That last month was the best of my life, I had to much free time to do other things, so much energy and so much love and gratitude for everything!

Read this for more information on breatharianism

When I went to Jasmuheen’s retreat in France, I wrote an article about my experiences. There you will find much more detailed information on some of the things that she taught us, like how to have a child if you’re breatharian, or how to check the prana percentage in your body. Please read it here.