What is the best raw vegan food processor?

I don’t know about you, but when I found myself searching to replace my old food processor, I kind of hit a wall. It’s so easy searching for the best blender compared to this, all sources unanimously point to the Vitamix, with the occasional JTC OmniBlend mention (or a Nutribullet for a cheaper and smaller option), but when you search for the best food processor, way too many results pop up.

Obviously I searched for features that would be useful specifically for a someone living a raw vegan lifestyle, since I’m not very interested in having the strongest dough blade…hence the title.

So I decided to do the research for you!

After looking at countless reviews and videos (even searching other raw food chef recipe videos and trying to guess the processor make from them!), I have finally found one that stood out. Below I made a video to show you the best features of this processor, as well as give you two very easy recipes for you to try at home – zucchini rolls and raw brownies!

What do you use a food processor for?

When I was eating cooked food, I never really used a food processor, we did have one in the house but I was too young to remember what my mum did with it.

When I went raw, in 2011, I had no idea on what equipment to buy, so I was really missing out by only having a hand blender!! It wasn’t until a year into it that I finally decided to get a processor, and gosh did my life change after that! I could finally do so many raw vegan recipes at home and have the variety that most people lack at the beginning because they simply don’t know what you can make or don’t have the right equipment!

In short, you can make thicker sauces with it, unlike a blender where you just turn everything into a smoothie. For example, you can make pesto, or tomato sauces for a raw lasagne/pasta, or hummus, or even smooth almond butter if you have the patience for it (I sure did when I discovered you can make almond butter at home!). 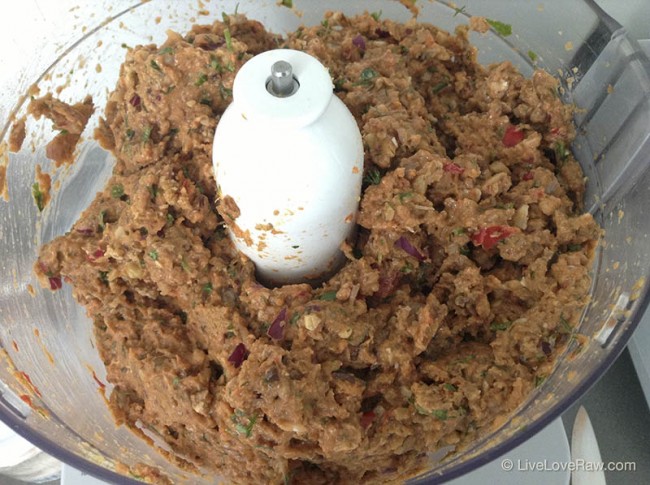 The knives are longer and spread further apart than in a blender, allowing you to keep some texture or chunks in what you are preparing, making it a very useful tool for sooo many recipes – just think of how a raw cake is made, the base is most likely done in a processor to keep it a little chunky.

Also, a typical food processor has a series of disks that you can use to chop or grate vegetables in a variety of different ways. There is a chute at the top where you can feed the vegetables in, and they get sliced on the way down.

I didn’t use it to it’s full potential for the first 3 years… I had no idea why anyone would want to use the cutting disks, so I just stored them in a box somewhere far away, the chute was far too small to do anything useful with it in my opinion, and I made less mess by using a grater.

With the latest processor I got, I finally began to see why you have all those disks! I’ll tell you why in the features list below.

So what is the best raw vegan food processor?

What are the features of the Breville Kitchen Wizz Pro?

* most of there photos are from the Breville website

Can I get the Breville Kitchen Wizz Pro in my country?

When I first read about it, I was a little sad because I didn’t see a way you could get it in Europe, they don’t make it obvious that in Europe they renamed it to “Sage”.

You can definitely get it in the US and Australia under the Breville name, and in Europe you should search for Sage. I live in Spain and got it on the UK Amazon, which took only 5 days or so to arrive. Usually German sites work best for delivery to Spain, but this one was a little harder to find, so I would recommend getting it from the UK.

I’m just getting into raw food, should I get this food processor?

If you have 600€ to spare, then of course, better get the best you can to give you the best options possible!

However, if you don’t have that much lying around, then there’s absolutely no need to get it. Please don’t stick to a hand blender and mini processor bowl though! Get something that will last you a few years and that will do a good job, but that’s relatively affordable too. The first thing I bought was a Kenwood machine that came with a processor, blender and a small coffee grinder in one. It’s similar to the link I put, but a slightly older version, it had 1000W and only cost me £150 at the time – it’s still alive today at my grandma’s. To compare, the (very good) hand blender I had cost £45 and lived for about 2 weeks before exploding on me…

For a beginner I would highly recommend something like that, as you will get 3 in 1 and the small coffee grinder is fantastic for making small amounts of liquid sauce or smoothies (honestly it’s the only feature I miss now!).

For a raw food chef, it is important to have a great machine so it will live long and do all the things you want it to do, that’s why I spent the time and money getting something that will last, but you just need to look at your needs and what you can afford at the moment to decide on the perfect machine for you. In reality, there is no “best processor” – the Breville is the “best” for me right now, but for your “right now”, it may be something else (Cuisinart is mentioned a lot, for example).

Good luck on your search and I hope you have found this video and description useful.

P.S. I’m in no way associated to Breville, it’s just my honest opinion.

Here’s another Kenwood processor I had brought with me to Bali (can you believe this is the BEST one you could buy in El Corte Ingles in Spain?!?!) – it was only 750W and took 45 minutes (!!!) to make almond butter, but it was still better than anything they sold in Bali…and it was cheap, just check out that link.